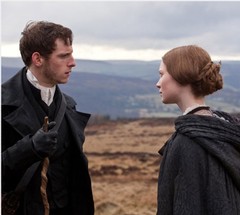 2011 release of Charlotte Brontë's classic romantic drama with Mia Wasikowska, Jamie Bell, Michael Fassbender, Judi Dench,Tamzin Merchant, Sally Hawkins, Imogen Poots, Simon McBurney, Sophie Ward, Harry Lloyd. Jane Eyre flees Thornfield House, where she works as a governess for wealthy Edward Rochester. As she reflects upon the people and emotions that have defined her, it is clear that the isolated and imposing residence - and Mr. Rochester's coldness - have sorely tested the young woman's resilience, forged years earlier when she was orphaned. She must now act decisively to secure her own future and come to terms with the past that haunts her - and the terrible secret that Mr. Rochester is hiding and that she has uncovered.